Moosehead Lake, the largest lake in New England and the largest lake east of the Mississippi River that is contained within the boarders of a single state, is located in west central Maine, north of Greenville. It encompasses 117 square miles or 74,890 acres, is approximately 30 miles long and up to 10 miles wide in some areas. The two main tributaries that feed the lake are the Moose River from the west and the smaller Roach River from the east. Moosehead Lake is also the head waters for the Kennebec River, which flows from the southwest corner of the lake. The mountains that surround the lake are in the Longfellow Mountain Range, which is geographically regarded as part of the White Mountains. The most predominant feature of the area is Mount Kineo; which rises 1,789 feet above sea level or about 763 feet above the lake. The mountain is mostly comprised of rhyolite and has a sheer cliff on the east side that over looks Kineo Bay. On the southern end of the lake you will find the small town of Greenville. First called "Cuba" and then "New Saco", the name of Greenville was finally settled on in 1835. The lake is bisected by the worlds largest mass of rhyolite  or what is commonly known as flint. The area was first inhabited about 10,000 years ago by Indians, but little is known about them because there has been no written records ever located. Artifacts that have been unearthed in the area indicate that they traveled by water and were big game hunters. Over time they have become known as the "Red Paint People" because of the red ochre that has been found in their gravesites.

This is logging country and the area is lightly developed, which makes it an excellent destination for those that like to really "camp". Stores and conveniences are few and far between, except in the Town of Greeneville. Because of the lakes size, the water remains cold during most of the year and will get rough in a moderate wind. The prevailing wind, like in most of Northern New England, is out of the northwest. Use caution when crossing its open bays, it is not uncommon to encounter 3 to 4 feet swells on windy days. This is not an ideal lake for the novice paddler to venture out on by themselves. When planning a trip on Moosehead, bring everything that you will need for the entire trip, which includes water or a way to filter and purify it. There are many primitive campsites located along the shores, with a few located on some of the bigger islands. All of sites are available on a first come, first served basis. There are no fees for camping at the sites located along the lake, with the exception of those at Lily Bay State. Park. Fire permits are required at the primitive sites and are available from the Maine Bureau of Parks and Land or from the towns Fire Warden. Make sure that you plan enough travel time to reach an alternative site in case your first choice is occupied. There are bear in the area, so it is advised that you store your food in a safe place over night. Here are a few tips for bear proofing your camp:
•Never eat or store food in your tent; bears have a keen sense of smell and will rudely awaken you in their pursuit of your food.
•Place your food in an air tight container and suspend it from a tree branch with a rope, away from your tent.
•Place all of your "carry out trash" in an air tight container and suspend it from a tree.
•Store all "table scrapes" in your carry out trash container; do not throw them off to the side.
•Don't leave any food in your kayak; this will be easy pickings for a bear and the damage they may cause trying to get to that food may leave you with a long walk back to your vehicle.
•(non-bear related tip) I recently read an article about a paddler that left his wood paddle along side his boat (like most of us do) overnight. He awoke in the morning only to find that a porcupine decided that his paddle made for a good snack; probably because of the salt residue left on the handle from his sweat. It is a very good idea, while camping in the North Woods, to bring your wooden paddle (and spare paddle) into the tent with you at night.

Several public access points can be found around the lake with the two best locations being Lily Bay State Campground and the Rockwood public boat launch. For a complete overview of the lake and the surrounding area, check out our trip report from July 2006 by clicking here 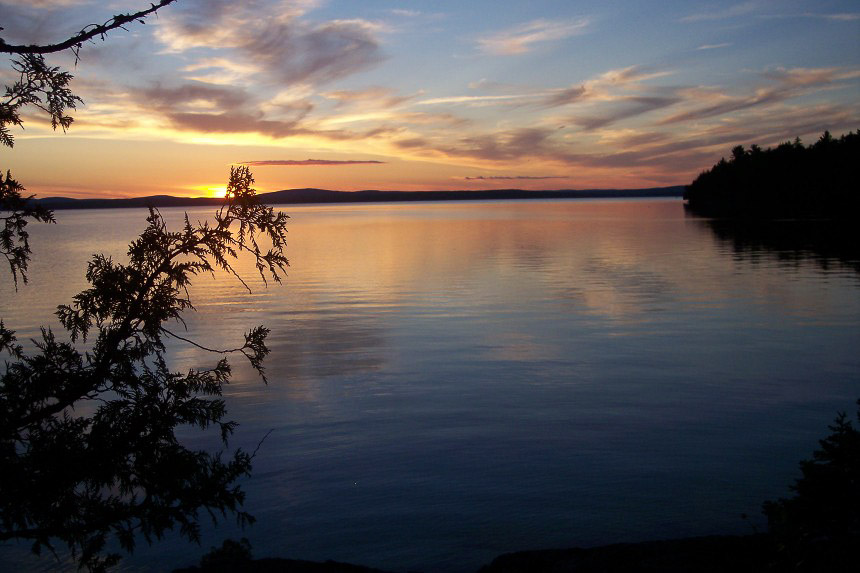